It’s the InDemand feature allows you to grab backers even after your Indiegogo campaign is over. That way, you will be able to build momentum for your campaign not just when it’s on but also after it’s over. Now, the most important criteria here would be to make the most of this strategy and keep drawing attention from new backers for growing your product as a brand. This requires a proper plan. Post marketing is vital and can bring a lot of traffic to your campaign only if you do it right! Here are some of the latest InDemand campaigns who have been doing an excellent job with post-marketing. 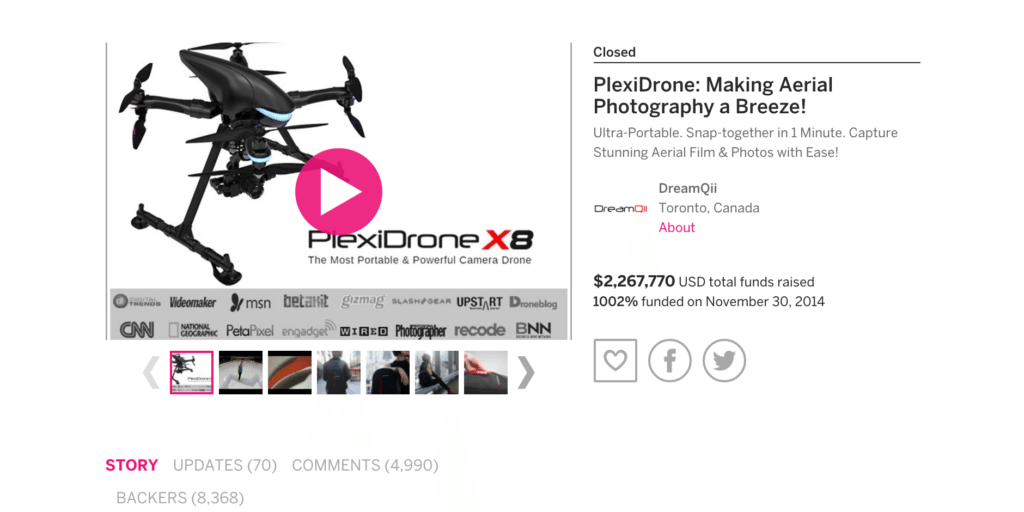 They have raised 1002% of their original goal and what stands out in their post-marketing strategy is the fact that they have responded to customer queries pretty well. Every single valid question has been answered with a personal message which shows that these guys are really looking forward to build a brand with their drone.

Bottomline: Answer those comments and queries on time! Bottomline: Highlight the amount you raised or any vital stat on the cover image. Their product is celebrated by audiophiles and the way they displayed all of it on their YouTube channel is commendable. It’s important to understand the correct social media channel for your product and Geek Pulse DAC made sure they used it well.

Bottomline: Identify the social channel for your product and market rigorously after your campaign gets over!

It’s a known fact that pledging for a product on their crowdfunding campaign will mostly let you have the product at a discounted price. The FLI Charge team made sure their backers are aware of this discount. They highlighted the exact discount they are offering which will grab the attention of more backers as they get to see a direct number there instead of assuming it’s coming at a discount.

Bottomline: Let the world know the discount you’re offering in the form of numbers!

If you are an InDemand campaign, you will have to make sure that your existing backers are not dissatisfied with your campaign progress. HOVR did a magnificent job by informing their backers with a proper note discussing the delay in delivery and have responded to every query that came their way.

Bottomline: Always keep your existing backers informed about your progress.

Make sure your product is highlighted under one of the top categories of Indiegogo if possible. It gives you and your campaign an extra edge in terms of being a masterpiece. Just like ASAP Connect got their USB cables featured under the “Top Phone Accessories” collection.

Bottomline: Work hard to get your product under a top featured collection.

What’s really cool about their InDemand campaign is the fact that they have mentioned the estimated delivery date on the pledge reward chart itself. So any new backer will know exactly when they’ll be having the product in hand. The dates might be a bit stretched but you need to ensure your backers are fully aware of it.

Bottomline: Give your backers a proper estimation of delivery dates.

If you’re working on a new variety of products, you can highlight them as the first thing for your crowdfunding campaign. It will help you grab extra attention from those who will be visiting your campaign now. Like iKlips DUO did by highlighting their special Italian leather lanyard in the form of a video.

Bottomline: Show the new varieties of your product as the first thing on your updated campaign page.

What is so cool about this project is that it has already had a lot of social attention during its prototype stage. And the maker did make sure to thank his backers and prepare an engaging social media feed for better outreach and promotion.

Bottomline: Don’t forget to be active on social media even after your campaign is over!

During the progress of your crowdfunding campaign, you do get a lot of press coverage. It’s important to highlight the same on your campaign page for your future backers. MIN7 did it well by highlighting their press coverage right from the beginning itself.

Bottomline: Make sure you highlight the press coverage you received.